Since the invention of the insulated bottle, there has never been a question of how to keep hot liquids hot and cold liquids cold. The bigger question has been how does it do that? The answer is this: by using foam or vacuum packing. There is more to an insulated bottle than meets the eye. What we see as one heavy-duty container is actually a container within a container, with either foam or a vacuum between the inside wall of the outer container and the outside wall of the inner container. Foam-packed containers keep cold liquids cold and vacuum-packed containers keep hot liquids hot. This method has proven highly efficient since the early 1900s, which explains why insulated bottles are popular among anyone who needs or desires to drink liquids on the go, like athletes, travelers, campers and hikers, and just the ordinary busy person who gets thirsty once in a while. Many baby bottles are also insulated.

The first known bottles, made of glass, were produced in about 1500 B.C. by the Egyptians. The bottles were formed by placing molten glass around a core of sand and clay. The core was then dug out once the glass cooled. The process of making bottles was time-consuming and complex, so they were considered a luxury item in ancient Egypt. By 200 B.C. , glass bottles were being made in China and Persia, as well as Egypt using a method whereby molten glass was blown into a mold. The Romans later adopted this same method and the technique spread throughout Europe during the 1400s and 1500s. The first bottle- and glass-making factory in the United States was established in Virginia in 1608.

New variations of the glass bottle began to surface by the 1800s. The baby bottle, for instance, was patented in 1841. The concept was not a new one, however. In ancient times, babies were fed using an urn with two openings. One opening allowed liquid to be poured into the bottle and the second opening was put in the baby's mouth. The sixteenth-century baby bottle resembled a duck; the baby was fed through the beak. Glass-blower John L. Mason devised the first glass jar with a screw-on cap "the now-famous Mason jar" in 1858. Also during the mid-1800s, Dr. Hervey Thatcher devised the glass milk bottle. The Coca-Cola company introduced the first soda pop bottle in 1915. Several other brands followed, each using a bottle with its own distinctive shape. Soda bottle shapes were standardized after 1934, when technology enabled companies to fire permanent color and, thus, company names and logos, onto bottles.

The bottle-making process first became automated in 1865 with the introduction of a pressing and blowing machine. The first fully automatic machine for making various types of glass bottles and jars did not appear until 1903, however, when an employee of a Toledo, Ohio, lamp-chimney company named Michael J. Owens put the Owens Bottle Machine into commercial use. The Owens Bottle Machine revolutionized the industry by enabling the inexpensive, large-scale production of glass bottles. Along with the Crown bottle cap, it helped spur the large-scale carbonated beverage industry as well. By 1920, most bottles were produced on Owens machines or those modeled after Owens' invention. In the early 1940s, manufacturers began to use blow-molding machines to produce plastic bottles. Blow molding is a process in which tiny pellets of plastic resin are heated and forcefully shot into a mold in the shape of the product. When the product cools, it takes the shape of the mold. The first plastic bottles were squeezable and made from polyethylene. Nat Wyeth, a relative of American artist Andrew Wyeth, devised the first plastic bottle strong enough to hold carbonated beverages for the Du Pont Corporation.

The first insulated bottle was likely designed by English scientist Sir James Dewar in 1896. In 1892 Dewar had invented a special flask still in use today and attributed to him by its name. Dewar created his insulated bottle by sealing one bottle inside another and pumping out the air between them. This created a vacuum, which is an effective insulator. Dewar never patented his invention, however. It was German glass-blower Reinhold Burger and his partner Albert Aschenbrenner, who made bottles for Dewar, who decided to market Dewar's invention. Burger and Aschenbrenner held a contest to name Dewar's device. A resident of Munich suggested the name thermos from the Greek word threm, which means hot. Along with Gustav von Paalen, Burger and Aschenbrenner formed a company to manufacture Dewar's invention and called it Thermos GmbH.

Paalen, Burger, and Aschenbrenner did not register the now well-known Thermos name until 1906, the same year they met American businessman William B. Walker in Berlin. Walker learned of their invention and obtained exclusive manufacturing and marketing rights to it in the United States. The American Thermos Bottle Company was incorporated on January 31, 1907, in Portland, Maine, and set up production in Brooklyn, New York. The Thermos insulated bottle quickly gained popularity across the United States. Famous users include President Taft; explorers Lieutenant E.H. Shackelt, who took his to the South Pole and Lieutenant Robert E. Peary, who took his to the Arctic; Colonel Roosevelt on an expedition to Mombassa; Richard Harding Davis on a trip to the African Congo; Count Zeppelin, who took his up in his hot air balloon; and the Wright Brothers, who took theirs to the sky as well in the first airplane. 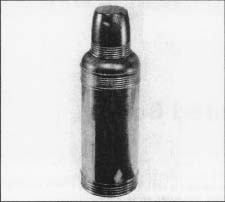 Glass-lined aluminum vacuum-sealed bottle made by the American Thermos Bottle Co. of Norwich, Connecticut, in 1915.
(from the collectiom of Henry Ford Museum & Greenfield Village, Dearborn, Michigan.)

This 1915 glass-lined aluminum vacuum-seal bottle was an early product of the American Thermos Bottle Company, founded in Norwich, Connecticut around 1907 (later renamed King Seeley Thermos or KST after 1959). The name Thermos is synonymous with the insulated bottle. Outdoor laborers, particularly construction crews, have been taking botHes like this one to work since KST was founded. Reminiscences of workers sometimes reveal that they often felt like they were really part of the workforce when they purchased, or were ceremoniously handed, a vacuum-seal bottle for their coffee.

School children plead for new lunch boxes and thermos bottles each year, too. Lunch box maker Aloddin and competitor KST wanted to sell to kinds, so their artists began a regular drill of changing the artistry and graphics on their school lunch boxes (first in metal, later in plastic) and vacuum-seal bottles. From 1950-1970 over 120 million kids' lunch boxes and accompanying vacuum seal bottles were sold, from Hopalong Cassidy to Peanuts. That's a lot of chocolate milk in those bottlesl Of course, it could be hot chocolate, too—the joke is that no one can figure out how the vacuum-seal bottle could be so intelligent—how does a vacuum-seal bottle figure out when to keep cold liquids cool and hot liquids hot?

The primary raw materials used in the manufacture of the insulated bottle are either plastic or stainless steel, which form the outer cup, and glass, which often forms the inner cup (the inner cup may also be formed 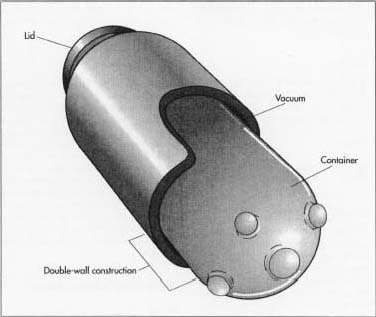 In an assembly line process, the formed outer cup is fitted with its inner liner. A glass filter, made outside the factory, or a stainless still filter, pounded from a sheet of stainless steel, is placed inside the outer cup.
from stainless steel). Insulated bottles for cold drinks are often lined with foam.

Many insulated bottles undergo stringent and thorough quality control inspections. In addition to on-line quality inspections, the company may test the finished product for cosmetic defects and also apply heat retention and leakage tests prescribed by Military Standard 105E. Companies may also employ a special lighting system, called a Macbeth lighting system, which aids them in visually inspecting paint colors to ensure that they match company prototypes. Prior to making the bottle, the foam itself may also undergo strict testing for amount of rise, density, temperature when mixed, viscosity, voids, and discoloration.

New insulated bottle designs are always being introduced. Designs are adapted to meet the needs and interests of the populations and cosmetic innovations, such as color schemes, change to meet consumer preferences. Many companies not in the insulated bottle business sell or give away water bottles with their names on them, knowing users will provide free advertising every time they carry their insulated bottle down the street. Insulated bottle companies are also expanding farther into international markets, targeting such areas as Asia, Mexico and South America, Africa, and the Middle East.

Where to Learn More

Previous：Vacuum flask knowledge Next：Stainless Steel: All About Food Grade 304, 18/8 and 18/10